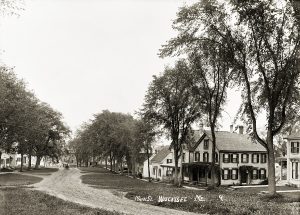 There’s a fascinating story behind the current exhibit of early 20th century photos at Lincoln County Historical Association’s Old Jail in Wiscasset, and Kevin Johnson is a key figure in the tale. Johnson, the photo archivist for the Penobscot Marine Museum (PMM) in Searsport, Maine, will tell all at a reception at the historic Museum & Old Jail on Federal Street on Thursday, August 12 at 5:00 PM

Johnson’s slide show and talk will delve into the story of the The Eastern Illustrating and Publishing Company postcard company and its photos of Wiscasset and its neighboring towns in the early 1900s. The presentation amplifies the photography exhibit, Lincoln County Through the Eastern Eye, that will be on display through the end of September.

Admission to the talk is free, but advance registration is requested.

The exhibit of these images will be open at 5 pm and the program will begin at 6 pm.
Please register in advance: https://www.eventbrite.com/e/162705804441