Establishing the Jail In Wiscasset

A plan for a second Lincoln County Jail was submitted by John North to the 1793 Court of Sessions for Lincoln County and was accepted by Attorney Jon Bowman at the January 1793 term of Court. The deteriorated condition of the old “blockhouse” jail at Pownalborough, as well as a need to provide a more secure facility to cut down on escapes, led to the plan to build a new facility. This was approved and built in 1795 near the present day intersection of Washington and Churchill streets in Wiscasset. Wiscasset, a coastal community, had become the recognized shiretown of Lincoln County and was a more central location than the old Kennebec River settlement at Pownalborough.

Notes accompanying the plan called for a new jail “forty feet in length and twenty feet in width.” A jailer’s house was to be built as well, measuring “36 feet in length and 18 feet in width.” Walls and partitions of the jail were to be “pine or hemlock timber, 12 inches thick, to be lined with 2 and ½ inch oak plank spiked on, and then lathed and plastered.” The cost for the new facility was anticipated at 450 pounds.

However, escapes and overcrowding led to the abandonment of the 1795 facility after only 16 years of use. Fourteen inmates escaped during this period and pressure built for the erection of a more secure facility by 1806. This second jail became the town poorhouse after 1811, when the jail we see today was completed.

A committee, made up of Abiel Wood, Jeremiah Bailey and John Merrill, Jr., was appointed in 1806 to assess the conditions at the 1795 Wiscasset Gaol. Their task was to determine if the structure could be reinforced and improved in order to eliminate the escape problem or decide if a new facility was needed. They recommended a new, two story facility and submitted a report that included details for a stone jail and wood framed jailer’s house on the land of Robert Elwell. For the next three years the subject was examined, debated and finally resolved. A new jail would be erected on the land of Abiel Wood and Thomas Nickels for the sum of $8000.

The cornerstone for the new jail was laid on August 1, 1809. In 1810, the Court of Sessions passed a resolution that a third story be added for the accommodation of poor debtors. The addition of a third story and a barn, woodhouse and fence added significantly to the price. The Committee asked for an additional $7,000 to accomplish this, but part of this construction work was not completed until 1818. In the end, some $22,000 was spent by the County for the new Commonwealth Jail and Jailer’s House at Wiscasset. The stone walls of the “new” prison were 41” thick at the ground level and 31” thick where the roof rafters meet the stone walls.

Prisoners were transferred by mid-1811, and a complete report was submitted to the Court of Sessions at the May 1812 term of Court. The new Lincoln County Jail would serve the County, officially, for 102 years, but was used only sporadically after 1913, at times when overcrowding necessitated, until its final abandonment in 1953. 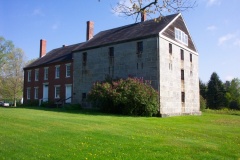 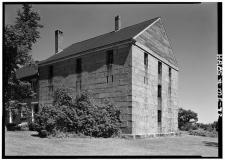 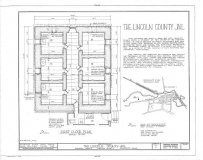