The (Lincoln County) County Commissioner’s Record of October, 1913, contains the vote to close the Jail on November 16th, 1913, and also includes a resolution to send all remaining prisoners to Rockland, Knox County, Maine. As a result of this action by the Commissioners, Sherriff Doyle was released from duty.

In 1932, prisoners were once again placed in the Old Jail, but these confinements were of short duration. Two 8-foot steel cages were installed in the Old Jail’s third story to accommodate prisoners who were awaiting transfer to Kennebec County Jail, or to the State Prison, at Thomaston, and were used sporadically until 1953. Also in 1932, a “liquor room” was made available in one of the old “vaults” to house contraband liquor during Prohibition. Not surprisingly, even the liquor managed to escape as evidenced by a newspaper article in the Boothbay Register for June 3, 1932, under the headline “Hijackers Visit Jail—Take Seized Booze.” A thief had entered the jail, picked a lock and got out with a large quantity of liquor despite the fact that the Jailer’s House was occupied at the time.

By Act of Maine ‘s Ninety-seventh Legislature, Legislative Document #174, the County of Lincoln, State of Maine, was authorized, on January 25, 1955, to sell, assign, transfer and convey all interest in the Jail property on Federal Street to the Lincoln County Historical Association for the consideration of one dollar. Since 1955, the Lincoln County Museum and Old Jail have been open for visitors. A tour includes two floors of the Old Jail and six rooms of the Jailer’s House. Visitors have been heard to say, “It’s a nice place to visit, but I wouldn’t want to live here.” 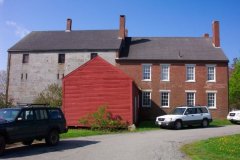 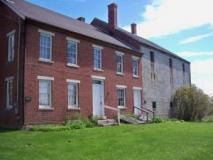 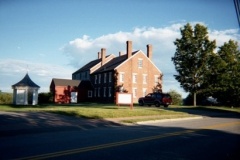