Visit One of the Oldest Remaining Jails in New England.

The 1811 Old Lincoln County Jail in Wiscasset, with attached 1839 Jailer’s House, offers visitors a rare view into an earlier criminal justice system and the lives of the people who enforced and endured it.

From 1820-1824 the Jail also served as the penitentiary for the new State of Maine. Lincoln County housed prisoners here until 1913 and continued to hold prisoners here on court day until 1953.Trained docents conduct tours throughout the summer.

Displays in the front parlor and dining room change year by year, but the 19th century kitchen, where the jailer’s wife had to cook for up to 50 prisoners in addition to her own family, is always on view. Visitors leave with a real sense of the hard work that came with being the jailer’s family, the hard life of the prisoners and the odd juxtaposition of family life and criminal incarceration.

Learn about the differences between crimes and punishments of the past and those of today. The Old Jail housed prisoners convicted of all manner of crimes, sailors from foreign navies and privateers alike, alongside debtors, drunks and vagrants. Experience the dark, the sounds of clanking metal and the tight spaces. See the grooves worn into the floor by the feet of prisoners shackled to the wall and the marks on the window bars where an escape was planned.

The Old Jail also contains several unique and remarkable examples of prisoner graffiti – a beautiful drawing of a large sailing ship, a detailed navigational map of the world, a cartoon-like drawing of a soldier, fragments of poetry, names and dates – all still on the walls where they were left well over a hundred years ago. 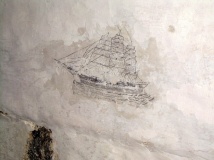