Visitors enter the house through the Ell, added by Woodbury Dodge after his purchase of the home in 1910. Once used as a work space, the room now houses exhibits on the local shipbuilding industry in the late 19th century and early 20th century.

Also on exhibit are examples of the carvings of Edbury Hatch, a noted Maine woodcarver.

The Kitchen or Keeping Room

Details of the home’s blank on frame construction, an unusual technique for this area, are easily observed in the kitchen. The posts and bracing, as well as the 31-foot beams across the ceiling and the floor boards are original to the house. The kitchen fireplace is the largest of four that are attached to the central chimney. This room includes furnishings that reflect the various uses of the area. It was not only a kitchen, but also dining room and work space, as shown in the display of spinning equipment.

Side Room to the Kitchen

In this room, as in the kitchen, construction details are evident. The room shows the various stages of modification that the house has undergone. Of note is the featheredge (board that thins out to thin edge) sheathing wall, examples of accordion lath, and sawn lath from a later date. The room also displays furniture and toys for children.

This room is named for the paint used on its wood paneling. This layer of paint, discovered during the restoration of the room, dates to the 1780s. An example of the original paint can be seen on the north wall to the right of the bed. The paint inside the cupboard next to the fireplace is also original to the house.

Note the architectural details in this room. In addition to the lovely featheredge walls, the paneling and the moldings, tunnel or tree nails (wooden pegs) were used to secure the beams in the southeast corner..

Furnishings in this room reflect both the 17th and 18th centuries.

This entryway is typical for a one-and-a-half story house of the 1750s. The paneling and plaster is a style that dates to the 1790s or later. The floor is original.

Evidence of the green paint in this parlor was discovered in this room during the restoration work. Restored to c.1820, the room boasts plastering on the ceiling and walls.  It was generally reserved for special occasions and Sunday gatherings and  may have been pressed into service for storage of various household items when needed.

Note the handsomely crafted Federal Period mantel (based on the classical proportions available in pattern books by architects of the time), the wainscoting, and corner cupboard. Except for a few small pieces, all of the furnishings in this room are of the 19th century. 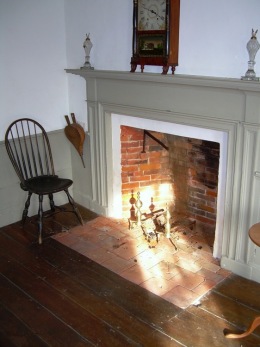 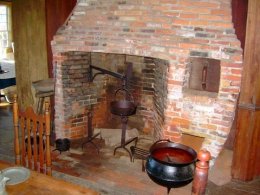 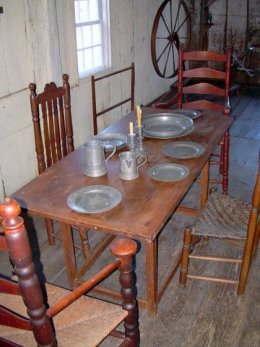 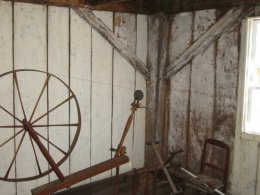