The staircase to the second floor offers yet another opportunity to view architectural details. Like many “cape” style houses of the 18th century, the primary staircase is in the rear of the building. As you ascend the staircase, note the joinery that ties together the rafter, post, plate, and tie beam. This joint, known as the English tie joint, was developed in England during the late medieval times, and used in Maine well into the 19th century.

This small bedroom was most likely added to the house sometime in the 1820s.  The fireplace was not part of the original chimney stack, but cobbled on later. The ceiling is unusually low because this floor was not originally planned to be a finished space. When this space was partitioned off for a bedroom, the ceiling beams were covered and concealed as was typical of 19th century taste.

According to records, the bed was locally made and dates to the 1830s. The small mirror over the blanket chest is believed to have been made by Mr. Davis of Davis Island in Newcastle.

This open space that leads to north end of the house would have been used for storage – much as it is now. Of particular interest are the cobbler’s bench and shoe making items.

At the far end of the upstairs is a 20th century exhibit room displaying antique hooked rugs. The art form became popular in the 1830s, and Mid-coast Maine has long been noted for the rugs produced in this region. 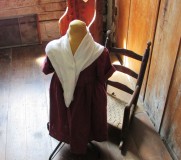 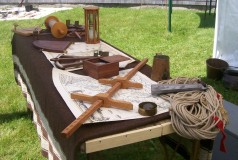