The history of this particular area goes back to the earliest years of colonial times. In 1626 the Pilgrims sent a ship up the Kennebec and traded corn with the Indians in return for valuable beaver skins. They urged the Crown to grant them a patent for land along the river so that they could establish a trading post, and in 1629 they received a grant of “all that tract of land or part of New England in America…which adjoyneth to ye river of Kenibeck, towards the western ocean, …” to the falls above Augusta, containing 15 miles on each side of the river. The grant contemplated the use of this land in order to “trade with ye savage people of that countrie,” and a permanent trading post was established at Augusta.

The Pilgrims were interested in this land as a means of paying off their debt to the London Merchant Adventurers. Once the debts had been paid in full, the land was sold in 1660 to four Boston merchants. This became known as the Kennebec Purchase. It made the new owners little profit because trade had dwindled and bitter Indian troubles began in 1675. By 1689 nearly all the settlers east of York had been driven out. Not until many years later, when there was a lull in the Indian disorders, did the Kennebec Proprietors organize. A corporation was formed and in 1750 at a meeting at the Bunch of Grapes Tavern (now the Exchange Building on State Street, Boston) Samuel Goodwin was appointed Agent of the Plymouth Company.

Samuel Goodwin made a survey and inducements were offered to encourage settlers to inhabit the area. In 1752 a fort was built at the site now occupied by the Pownalborough Court House. It was named Fort Shirley in honor of William Shirley, Governor of Massachusetts. Fort Shirley’s importance waned when other forts were built farther up river near Augusta and Winslow. After the capture of Quebec in 1759 led to the cessation of Indian attacks, the coast of the Province of Maine, formerly consisting of the single county of York, was given two new counties. Cumberland and Lincoln, which were carved out of what had been the eastern part of the original York County. The Massachusetts Great and General Court, when incorporating Lincoln County, also incorporated a town at the site of Fort Shirley, naming it Pownalborough after the new Governor and establishing it as the shiretown. 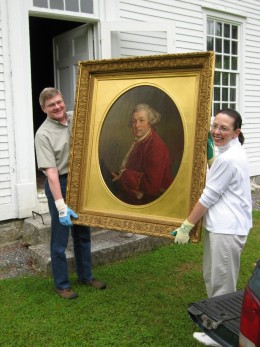