The lowest court in the system was the Court of General Sessions, which had administrative as well as judicial responsibilities. It laid out roads, licensed ferries and innholders, and arranged for care of the indigent. Its jurisdiction in legal matters covered thievery, assault and battery, petty debts, etc. The judges came from the various communities within the county.

The next judicial level was the Inferior Court of Common Pleas, which had jurisdiction in such matters as land disputes, acts of violence, larger debts, etc., and also disposed of cases appealed from the Court of General Sessions. Cases were tried before a jury, and the sessions of this court were regularly attended by professional lawyers from Massachusetts.

At the time the Court House was built judges and attorneys practiced within the legal system for the colony of Massachusetts.  The only law book was the published Acts and Resolves of the Province of Massachusetts Bay, a copy of which now sits on the Judge’s bench in the courtroom.  There were no volumes of case law until 1805. Blackstone’s Commentaries and a few other treatises were being circulated, but that was it. One of the reasons at least three judges/Justices sat together was to help them better remember and apply precedent. The Judges

The judges of both of these courts were prominent men of the country and were chosen as men of good judgment and even temper. Sometimes the same man served on both courts. Formal legal training was not a requirement. The court sessions were conducted with great dignity and decorum, with black robes and wigs worn by both judges and the lawyers. From six to twelve judges were appointed annually, and a quorum of three was needed for a trial.

Standards of morality were strict within the court and were strictly and conscientiously enforced by the court. 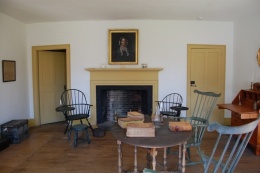