In addition to its distinguished presence as a public building, what imbues the Pownalborough Court House with warmth today is the story of family activity that once pulsed through it. Long after affairs of law quit the place, for nearly two centuries, the building remained a cherished homestead, returned to again and again and beloved by generations of Goodwins and their descendants.

A Kennebec Proprietor and Commander of Fort Shirley, was the agent and attorney for the Plymouth Company at Frankfort, and when the courthouse was built he and his family were its first occupants. To those early Goodwins the new quarters must have seemed luxurious indeed. Back in 1756, Major Sam had brought his family from Charlestown, Massachusetts, to live within Fort Shirley’s rough stockade when the French and Indian Wars were still raging. In his history of the family, Major Goodwin’s grandson wrote that “whenever Indians were discovered the inhabitants would fire alarm guns and the men would run with their muskets to their assistance,” and when men went out to work on the land they would sometimes “set one of their number on an eminence as a sentinel to prevent surprise.” The capture of Quebec brought to an end the tension that had gripped the area. It wouldn’t be many more years before the settlers and Native tribes would be caught up in yet another tense and waring time – the American Revolution.

The Family in Town Affairs

From the beginning the Goodwin family took an active interest in town affairs, serving as selectmen, town treasurers, postmasters and school teachers. When one of Fort Shirley’s blockhouses near the Court House was adapted for use as a jail, Sam Jr,. at 21, became its keeper as well as deputy sheriff. He also obtained a ferry license and permission to sell liquor. After his death, Sam’s large family and descendants lived next door to the courthouse until well into the 20th century. But it was Major Sam’s daughter Rebecca who established the courthouse as a homestead. Married to Captain John Johnson in 1777, Rebecca bore nine children, among them Rowland, who became a sea captain, and Thomas, businessman, postmaster, farmer and officeholder, a man of wide interest, kindly and much loved. Eventually the two brothers became joint owners of the courthouse and divided it between them in a formal and amicable arrangement, each living on one side, with the central hall and stairway remaining in common. 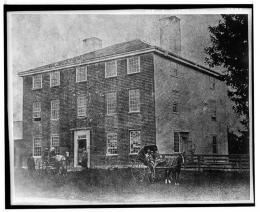 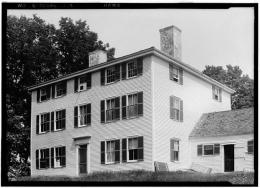 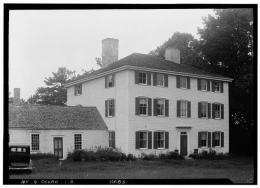 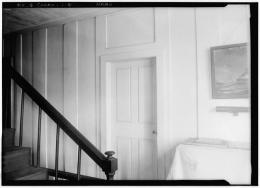